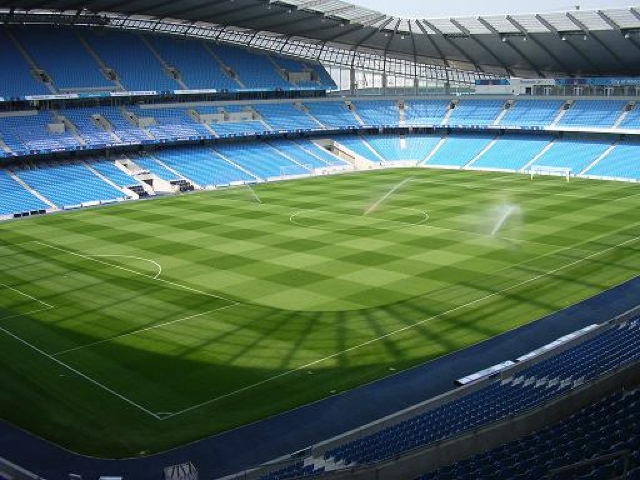 Manchester City are a major title rival. Whether we like it or not, the Billions of pounds that have been pumped into the club, have achieved the desired result. We can talk about a lack of tradition until we’re blue in the face, but there’s no reason why Manchester City can’t reproduce the success achieved at Chelsea after the arrival of Roman Abromovich. With City currently sitting second in the table and having already beaten Chelsea at Eastlands, this is truly the second major test of Arsenal’s title credentials this season.

An unfortunate quirk of the schedule sees us play the majority of our most difficult matches away during the first half of the season. That means more opportunities for the pundits to write off our title ambitions if we’re unable to come away with positive results. The flip side of that argument is that we should have a glorious chance to gain ground on our rivals by taking points off them at the Emirates during the business end of the season. But while a title can’t be won in the first half of the season, it can easily be lost. We can’t afford to drop points at Anfield, Stamford Bridge, Eastlands, Villa Park, Goodison, and Old Trafford before January and still expect to be challenging at the top. Sunday we’ll have a chance to keep the pace, knock City down a peg, and prove that we can get a result in a big away match.

There’s nothing like the excitement and anticipation before a really big fixture. It’s a chance to prove your quality against top opposition and propel your season onward to bigger achievements. But it’s been a long time since we’ve come away from a big fixture feeling anything other than bitter disappointment. Last season we lost every major away fixture both domestically and in Europe. Many of those results were even more disappointing considering the way we played. Often we outperformed our opponents in every area except the scoreboard. But that’s become an all-too-familiar refrain. The time has come to win a big match and validate our belief that we are genuine title challengers.

It’s often said that you don’t need to beat your direct rivals to win a title. But I think that’s a little misleading. If you continually lose matches to the best teams in the league, how can you maintain the belief that you deserve to be considered among the best? Moreover, once you’ve dropped points to the likes of West Brom at home, you have no choice but to make up for that result by taking points off the top sides. So we arrive at Sunday’s match with the feeling that we desperately need a big win and knowing that it’s been a very long time since we’ve garnered one.

As for the match itself, you could probably substitute a Chelsea preview and still hit most of the major talking points. City are a big, strong team that will setup to stifle us in the middle of the park and try to create chances on the counter. It’s similar to what they did against us last season at Eastlands when they came away with a 4-2 victory. But at that time, they were still managed by Mark Hughes and the team was missing some of the holding midfield monsters they have now like Yaya Toure. It’s safe to say that Mancini’s City are even more conservative than Hughes’ version, as demonstrated by the dire affair at the Emirates near the end of last season. But they are discipled and difficult to break down, as you’d expect from a team that will likely deploy three holding midfielders. Mancini will probably have De Jong, Toure and Barry in midfield looking to kick away any signs of elegant football in the middle of the park. Considering that Chelsea had 57% possession against City, we will probably have most of the ball and it will be up to our players to find a way through the City’s defensive setup.

There are two principle differences between our match with Chelsea and Sunday’s fixture. First, City don’t have Didier Drogba. No matter how hot Carlos Tevez might be at the moment, he doesn’t pose the same kind of threat that Drogba does. I’m not suggesting that he couldn’t get a goal against us, but he doesn’t have the same physical advantage as the Ivorian. Second, City’s back four isn’t as good as Chelsea’s. Kolo Toure was a great servant to Arsenal, but he’s well past his best. Toure and Kompany could struggle to handle Chamakh’s physical presence in the middle. Both Zabaleta and Lescott have been deployed by Mancini at left back and neither could handle Theo’s pace if Wenger hands him a start. If Nasri starts on the right wing, then he could really give them fits.

One player who will have a lot of responsibility in this match is Andrey Arshavin. I’m assuming he will come back into the starting lineup and he’s come under fire lately for his effort and end product. Arsene Wenger defended him in his pre-match press conference and relied on statistics to prove that the russian is having a stellar season. But as it has been famously stated, there are “lies, damn lies and statistics.” Regardless of Arshavin’s statistical contribution, he’s been a liability at times this season. Against Birmingham City it wasn’t just effort that was lacking, but quality as well. If Mancini starts Jerome Boateng at right back, Arshavin will have to work had to ensure that the German doesn’t have the freedom to forage forward at will. Likewise, if Micah Richards gets the start, Arshavin should have the beating of him if he’s in the mood. A motivated Andrey could be difference for Arsenal on Sunday.

One reason for encouragement is the fact that City really struggled to deal with Blackpool’s passing game last weekend and they were lucky to come away from that match with three points. If our passing game is working the way it can, it’s certainly on a different level than Blackpool’s and City might find themselves chasing shadows. If that’s going to happen, then our captain will have to be back to his brilliant best. He got a little more than an hour against Shakhtar on Tuesday, and while he didn’t look completely sharp, I’m sure it was more than enough to shake off any rust from his injury layoff.

Speaking of Cesc, he’s been talking this week about wanting to win trophies with Arsenal and how he is completely committed to the club. My guess is that, in the wake of the Wayne Rooney debacle, players will be lining up to tell the media how committed they are to their current club and how money plays no factor in their career choices. While some of it might be disingenuous, it’s worth noting how much class Cesc showed in handling the Barcelona situation this summer as compared to Rooney’s recent contract dispute.

But Cesc isn’t the only one talking about Arsenal’s need for trophies. We heard it from Clichy this week and even the Boss joined in the discussion suggesting that we will take both domestic cups more seriously this season. While it’s always nice for players and managers to recognize the need for silverware, I think this team needs to walk before it runs. In order to win trophies, a team must win a few big games along the way and this team hasn’t done that for quite some time. A win on Sunday would be a good step in the right direction.

You can’t discuss Arsenal’s title chances or even our chances of winning a single match without some mention of the defense. Once again we’re without Thomas Vermaelen and it remains to be seen whether Koscielny will be available. On the bright side, Barcary Sagna looks set to replace Eboue on the right side while Gael Clichy will almost certainly retain his role on the left for better or worse. Almunia still isn’t “fit” and so it’s another start for the suddenly world class Fabianski. As good as he’s been, there’s still a palpable sense that a howler is around the corner. This season, he wouldn’t be alone as goal keepers all over the league are making an unusually high number of gaffes. Regardless, he’s our best option at the moment and hopefully his good form will continue.

Our central defenders will have their hands full with the always active Carlos Tevez and while he doesn’t pose the same physical threat that Drogba does, he will pester them at every opportunity. Blackpool conceded a goal last weekend when Tevez pounced on a lose touch by the defense on the edge of their area and scored. Against Chelsea, Squillaci was almost punished for taking an extra touch and giving the ball away, so he’ll have to be a little quicker with the ball on Sunday.

With no Jack Wilshere for this match, Wenger will have to make some important decisions in midfield. Considering City’s size, it wouldn’t surprise me if he chooses to partner Cesc with Song and Diaby. Personally, I’d love to see Nasri moved back into midfield and Theo given a chance to run at Zabaleta but I don’t think I’ll get my wish. Regardless, our passing in midfield will have to be crisp. Diaby made some great runs against Birmingham but his distribution was often too slow. Against City’s powerful midfielders he won’t have the luxury of making runs through the middle of the park with such ease and any cheap loss of possession would play right into their hands.

Ultimately this is a match that we simply can’t afford to lose. Not because it would leave us too far behind the leaders, but because it would be another blow to our self-belief and undermine our claims that we are ready to challenge for the title. We can talk all we want about winning trophies, but at some point you must win the big games first. It’s time that this Arsenal team won a big. We have enough healthy players for this match to get a result and I think that our passing game, if it’s clicking, might just be too much for City to handle. They were able to stifle Chelsea’s plodding attack, but we bring a different kind of challenge. If their performance against Blackpool was any indication, I think they could be in for trouble tomorrow.

Last season’s match at Eastlands was an emotional affair dominated by Adebayor’s disgraceful behavior. His goal celebration and stomp on Van Persie were disgusting, but they were really the highlight of his awful season. This time around, he should be reduced to side-show status and I don’t expect him to start despite his hat trick against Europa League competition. We need to put that distraction out of our minds and concentrate on the task at hand.

With Liverpool dropping off the radar screen and United seemingly losing their way, this is the new “big match” and it’s one that I think we are ready to win. We’ve done a lot of talking this week, now it’s time to back it up.