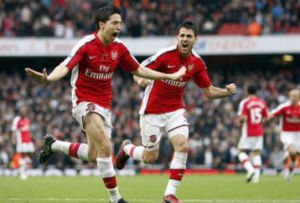 It should be all about the game … but it’s not
Remember how you felt that day? Remember how your blood boiled as you watched Eduardo on the ground, writhing in pain. Remember how you wondered if he would ever play football again. It was a terrible feeling and terrible moment in football. But a funny thing happened almost immediately after the match. Everyone came to Martin Taylor’s defense. Journalists and players and managers were lining up to tell anyone who would listen what a great and honest person Taylor was and how he should be instantly forgiven for a momentary lapse. It was astonishing really. There was Eduardo, fighting for his career and even his life, while the media worked overtime to defend the player who placed him in jeopardy.
The penalty for a straight red card is a three match ban. Taylor served his ban and was welcomed back to the pitch with open arms. Can you imagine the furore that would have erupted if the FA had decided to retroactively issue a 6-month ban due to the severity of the injury. The rules clearly provide for a three match ban, so the FA would be abusing their authority to deliver any further punishment. And how could you possibly punish such an honest, good, kind young man like Martin Taylor? You couldn’t. It just wouldn’t be right. Just like it wouldn’t be right to punish Steven Gerrard for diving, or Wayne Rooney for diving.
Face facts, European football is rife with racism and xenophobia. And nowhere is xenophobia more evident than in British football specifically. Just think back to last season and Phil Brown’s slanderous accusations following our FA cup triumph over Hull City. Despite any evidence to support Brown’s claims that Cesc spat, the British media were quick to brand him as despicable and even went so far as to say that spitting is worse than being punched in the face. I would gladly deliver a punch to the face of any moron who believes such a thing. Xenophobia reared its ugly head on that occasion, and the journalists who condemned Cesc for his supposed spitting, never felt any obligation to retract their comments after he was vindicated. It’s just easier to defame a foreigner without a second thought about the truth or the ramifications. And that is precisely what is happening to Eduardo.
Eduardo dived. His dive resulted in a penalty kick being awared. The resulting goal was important to the tie, but not dispositive. There are reasons why Eduardo did what he did, but none of us and no journalist will ever know them. Only Eduardo knows if he was being deceptive, protecting his body, expected contact, or was actually touched in some way. What we do know is that the penalty for “simulation” is an immediate yellow card. Now, it seems that the penalty for diving is quite different when the Scottish FA and british media decide to make Eduardo’s actions an issue of international importance. You can get a yellow card for diving. If you’re the proper nationality, you can even escape scott-free for diving. But if you’re Eduardo, somehow this yellow card offense rises to a two match ban. It’s senseless and beyond illogical but that’s the state of European football today.
Just imagine if you were caught speeding in a car. The penalty for speeding in this example is a monetary fine. The same fine has been issues for years and rarely receives attention. But you happen to be foreign, and your speeding attracts the attention of the media who sensationalise your violation. Now the courts decide that you will receive three years in prison for showing contempt for the law. It would be a violation of your civil rights and an outrageous display of institutional bigotry. And it would be no different than what is happening to Eduardo. Whether his dive mattered to the tie or not, whether it was blatant or not, whether it was intended to deceive the referees or not is irrelevant. Dives go unpunished in almost every match, every weekend. The proper punishment for a perceived dive is a yellow card. Any additional punishment, ex post facto, is tainted by the presumption of bias and ulterior motives. Arsene Wenger called it a “witch-hunt,” but what Eduardo is experiencing is actually xenophobia, just like what Cesc experienced last season, and it’s disgusting.
The saddest part of the Eduardo saga is that it’s managing to overshadow the first really big match of the young Premier League season. While it’s just another three points on offer, this game will certainly serve as a barometer for Arsenal. No matter how spectacular our start to the season appears, a poor performance at Old Trafford will lead some to believe that it has been down to inferior opposition. That’s an absurd conclusion. Just look at Manchester United’s result at Burnley, or Liverpool’s result against Aston Villa at Anfield. At this level, winning any game is an achievement. Winning games by three and four goal margins is exemplary. But you can’t change perception and the perception of Arsenal if we look bad today will be that we’re not as good as our first few games suggested.
Now, just in case you’re having trouble getting excited for this match. In case the Champions League draw, and the transfer rumors, and the Eduardo uproar have you distracted, allow me to get you properly focused. Here’s a nice, shiny new quote from that dirty little prick Patrice Evra regarding his last match against us:

“What Arsenal did that day was shameful. I was asked if it felt like there was a contract out on me and I had to say ‘yes, yes, yes’. It’s not at all the way in which Arsenal normally handle matches because they usually play really good football and are not overly aggressive – it was a big change. That’s why I have to thank the referee. He came up to me and said ‘Look I don’t know what’s going on but since half-time all the Arsenal players seem to be out to injure you. Don’t get involved’. I particularly didn’t like the reaction Fabregas showed in that game when he knew full well we had a Champions League final to play that month. We’ll meet again one day, hopefully off the pitch, and I’ll be able to let my personality tell him what I think.”