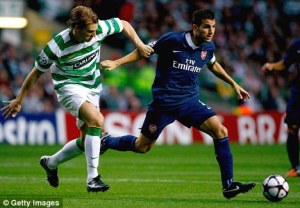 Gunners’ fans begin mourning the loss of the Arsenal Captain
It’s almost hard to put my sorrow into words today. I’m sure that you too are struggling with the emotions. With the season off to such a good start, now we must somehow recover from the gut-wrenching news that Cesc Fabregas has been sold to Barcelona. That’s right, Arsenal and Barcelona have agreed to a fee…well…a fee “range.” You see, what Arsenal and Barcelona have done is to enter into an unorthodox “pact” in which we have agreed to sell Cesc for 25-30 million Pounds. The sale would occur this summer if we fail to see off Celtic, or next summer if we manage to progress to the Champions League group stage. Pretty crushing news.
And it makes complete sense if you think about it. Both teams have signed a binding contract to do something that might take place next week or next year. The binding contract sets forth undetermined consideration, and surely can’t be impacted by Cesc’s performance this season or even the possibility of an unforeseen injury. Makes sense to me. I mean, why agree to a transfer next summer when you can go through the much more complicated and contrived process of trying to agree to next summer’s transfer this summer. That’s what they teach you in law school right? Always sign an ambiguous contract for unpredictable future performance rather than waiting for the time when definite terms can more easily be agreed. That is what I learned in law school right? I’m having a hard time remembering through the fog of beer and Crown Royal.
So there you have it. Unless, for some ridiculous reason, you choose not to believe the Spanish press, Arsenal have signed a “pact” requiring us to sell Cesc to Barcelona at some time for some amount of money. The story was apparently first reported by El Mundo Deportivo which means “The Used Toilet Paper” in Spanish. (You might want to check my translation because my Spanish is a bit rusty and I just made the assumption that made the most sense.)
Obviously, I am being more than a little bit facetious with my reaction to this story. The Used Toilet Paper’s story is so preposterous that it could be made into next summer’s blockbuster science-fiction film. While the idea that we might sell Cesc to Barcelona at some point in the future is not beyond the bounds of reason, there is simply no reason in the world why any club would sign a pact to sell a player in a subsequent season. Circumstances can chance so substantially that the pact could easily be rendered unconscionable. The buying club could run out of money, the player could have an abysmal season, the player could have a season that raises his value, the player could suffer an injury, or the player could even decide that he does not want to transfer to the buying club. There are myriad other possibilities that would equally abrogate the pact’s purpose or intention. So for those reasons, and so many many more, this story is complete and utter crap. But what would you expect from a publication called The Used Toilet Paper?
And if you need any more proof that the media possess a “random transfer rumor generator,” how about this one. “Intermediaries” have suggested to Barcelona that they should bid for Alex Song. What the heck does that even mean? And which team would benefit from that move? It makes no sense for either club. Seriously, the Spanish media are starting to make the British Tabloids look like they have principles.
Now that we’ve agreed we can get on with our lives secure in the knowledge that Cesc has not yet been sold, we can get down to some meaningful business. Unfortunately, there’s very little meaningful business to get down to. We’re still linked with the usual cast of characters and Chamakh might be back in the running now that Bordeaux have turned down his latest suitor, West Ham. But the new addition to our dance card is a player that could make tweeting and blogging nearly impossible. We are linked with 22-year old Hungarian winger, Balazs Dzsudzsak. (No I did not have a seizure while typing, and no, the “z” key is not stuck on my keyboard, that is actually his name.)
According to young Balazs (pause for laughter),

“I have just received the news that Arsenal has formally made an approach for me
… Now, what can I make of this? Of course, I do not want to get ahead of myself. … But if such a club is interested in you, there is nothing wrong with being proud of such a thing.”

And his agent adds,

“I’ve also heard about rumours of the supposed interest of Arsenal but I can’t confirm or deny this news.”

I obviously know nothing about this player except that he was probably teased a lot as a child which must have hardened him into a steely, terrifying figure. But since he’s young, relatively unknown, and a winger, he certainly meets the criteria to be an Arsene Wenger target. Whether there is any fire accompanying this smoke remains to be seen.
Regardless of who we’re after, my guess is that the transfer action will now heat up in earnest for Arsenal. With the Champions League group stage money nearly in our pocket, Arsene should have the green light to spend what he must to strengthen the team. No matter how strongly we have started, the bench for Tuesday night’s game tells you that we need to strengthen. Silvestre was the only cover for the center-backs. There was not a single striker on the bench. And the only midfield reinforcement with any meaningful experience was the unpredictable Diaby. So as confidently as we have started, with our penchant for injuries and the summer sales, we’re going to need a little more depth to feel really optimistic.
That’s about all there is at the moment as far as Arsenal is concerned. The players are giving their opinions about the Celtic game and the start to the season. The concensus is that the team have been galvanized by media scrutiny and are playing for each other more. Fair enough.
There were some league matches Tuesday and Wednesday but the most notable was played at Turf Moor. Burnley hosted Manchester United just days after United escaped opening day with a win against another promoted side, Birmingham City. Watching the match I was astounded at how poor Burnley played for the first 20 minutes. On the evidence of that performance, I was ready to send them back to the Championship myself. But there’s nothing like a goal to change a game and Burnley got a cracker of a volley after comically squandering a surfeit of chances in the box. The referee tried to gift United the win, as usual, by offering them a penalty (probably deserved) and a mysterious four minutes of second-half injury time, but neither effort was successful. Carrick took the penalty for some reason and failed to convert and the four minutes of stoppage time only prolonged United’s suffering.
It’s three terrible points dropped, and although it’s only August, every point counts. (Pardon the cliche.) More than anything, the game made me wish we played United tomorrow. Without Vidic and Ferdinand their defense looks poor. Unfortunately, it seems Vidic will return in time for our visit to Old Trafford, but Ferdinand is expected to miss out. We could have gotten even better new from this match if Wayne Rooney had been issued the straight red-card he deserved for a violent and petulant challenge late in the match. Had the red card been show for violent conduct, Rooney would have missed our match and we would’ve had the luxury of facing a Berbatov-Owen strike force. Not exactly Rooney-Tevez-Ronaldo now is it?
But that’s enough news about a team that will likely battle against relegation all season. We’ll play them soon enough and, if we have any healthy players left, I’ll be excited to see if we can exact some revenge for our Champions League exit last season.
Hopefully our flood of transfer signings will start soon and that’ll give us something to discuss before the Pompey match on Saturday.
Until tomorrow…