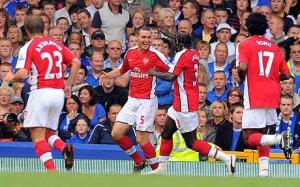 Sky Sports can stick our six goals up their Arse
In case you missed it, Sky Sports’ season preview article was fronted by a photo of players from Manchester United, Chelsea, Liverpool and Manchester City. That’s their definition of subtlety I suppose. But the message was loud and clear: Arsenal are out of the top four. Well, after one game, we’re at the top of the table and sent a clear message of our own: we’re not ready to be written off just yet.
After sending Everton to their worst home defeat in club history everyone from Arsene Wenger to Cesc Fabregas was quick to point out that it was just one match. Naturally there will be more difficult and frustrating days to endure at various points throughout the long season. But with most of the global media frothing at the mouth to write our obituary, this match was an important statement of intent. We may not get results like this every weekend, but it will lift the team’s spirit and belief and hopefully be a springboard to greater achievements.
.
Although the game started slowly, but once we got into a rhythm Everton looked out of their depth. Denilson’s scored the first goal with a screamer from the top of the box after nice work from Bendtner and a cool layoff from Cesc. The next two goals came from headers. Vermaelen ghosted behind the defense on a free kick and finished expertly for the second. Then Gallas, not to be outdone, headed in from a free kick for the third. While I was worried about Everton set pieces before the match, it was Arsenal that did the damage.
After the interval we were even more dominant. Cesc scored from a brilliant flowing counter attack that was vintage Arsenal. The move also showed how much freedom he has in this formation. Cesc quickly followed up with a fifth from a great solo run that saw him take the long throw from Almunia, race up the field and blast into the lower left corner. Finally, Eduardo finished off the Arsenal scoring when he was in the right place to blast home the rebound after some clever work from Arshavin saw his toe-poke hit the post. It was a long-awaited return to the Premier League and a return to the score sheet for the crozillian. We conceded a Louis Saha goal in injury time but no one was in the stadium to see it so technically it doesn’t count.
The match itself was a joy to watch. I think every Arsenal fan entered this season with that seed of doubt about our credentials. We had big injuries, young players, and added little while letting influential players go. So while we all try to be optimistic before a new season, I was just hoping to see some sign on Saturday that we are still a top side. None of us could have expected the result to be so emphatic. But while Arsene and the team want us to remember that it was just one game, allow me to provide a few observations from the game that could have more far reaching implications.

You just couldn’t ask for a better way to start the season or a better precursor to a crucial European tie. For me, the fact that the media wrote us out of the top four was the best motivation for the team. A team that plays with a chip on its shoulder can be very dangerous indeed.

It’s hard to say who deserved man of the match on Saturday. I know it’s a cliche, but it really was a team effort. Let me put it this way, there are no less than six players that could have been given man of the match without argument. But the most encouraging element of the team’s performance was the quality play from Denilson and Song. These are the players that have been most maligned (frequently by me) and who have been shown great patience by the boss. But on Saturday you saw all the reasons why Arsene Wenger has stood firm in his beliefs. Denilson was solid and scored a beautiful goal. Alex Song was really transcendent. He played defensive midfield with energy, intelligence, toughness, and even some attacking flair. Song’s tackling and marking were solid, but his distribution was tremendous. He showed real poise and great decision making.

Here are some past quotes from various blogs about Song and Denilson:

“The Song – Denilson axis is about as effective as chucking pebbles at Godzilla but this isn’t really any surprise.”

“Alex Song makes me sad. It’s not his fault, I know, but that a player so average is now a first team regular for Arsenal symbolises all that’s wrong with us.”

“I look at Alex Song and remain baffled as to how he’s even near the first team at Arsenal.”

Reading these quotes makes you realize just how far these players have come. But more importantly, if they can play at this level all season, just think of how much that improves our squad. If a Denilson-Song midfield becomes a strength rather than a weakness, then we will be a formidable team indeed. With Nasri, Rosicky and Diaby eventually returning, midfield will seem an embarassment of riches where it once seemed a deficiency.

And there’s more reason for encouragement looking at results from around the league. Liverpool lost in unimpressive fashion. United struggled to get a result at home against newly promoted Birmingham City. Chelsea should consider themselves lucky to have gotten a single point at home to Hull, let alone the three points they garnered. Additionally, the blues looked out of sorts in Ancelotti’s diamond midfield formation. Aston Villa were embarrassed at home by Wigan. And while Citeh beat Blackburn, they were far from convincing. I watched that game and their defending was shameful. Greedybayor may have had a nice goal, but he ambled around the pitch aimlessly, while Kolo brought little stability to a defense that always looked like conceding. All in all, the results suggest that we can compete for top honors. Of course, it’s important to heed Arsene’s words that this was just one game. No need to get carried away.

So now the burden is on the players to refocus. They can’t get carried away by this result because an even bigger fixture is now just days away. It’s almost unfathomable that we play a massive Champions League match on Tuesday, but there it is. We’ll be heading to Celtic Park full of confidence, but hopefully not full of arrogance. Celtic Park can be an intimidating place to play, but if we approach the game with the same attitude on display at Goodison, we certainly have the quality to get the necessary result. Any win will do really, but if the players feel like scoring another six that would be fine with me.

I believe more strongly than ever that any signings Wenger might make are dependant upon our qualification for the Champions League group stage. But if we are convincing on Tuesday, and bring home a few away goals from our trip to Scotland, then it’s possible that the funds will be available to spend before the tie is resolved. Either way, it’s a match I’m really looking forward to seeing. As enthusiastic as we all were for the return of proper football, Saturday’s result served to increase my excitement to near unhealthy levels. (My wife would argue that they were far beyond healthy levels already.)

So that’s all there is for now. We sit atop the Premier League table and hopefully that’s where we’ll be in May. If nothing else, I hope the bastards at Sky Sports and every other pathetic media outlet that wrote us off before a ball was kicked in anger, choked on something when they saw the scoreline from Goodison Park on Saturday. We owe them a thank you for giving us that little extra motivation.